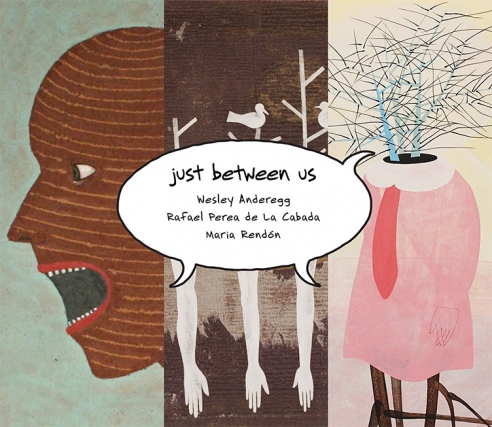 
Hardbound. 44 pages.
With essay by Jeremy Tessmer, brief biography on each artist, selected exhibition history for each artist. With 37 plates. ​​

Sullivan Goss is pleased to present the work of three new artists to the gallery: Wesley Anderegg, Rafael Perea de la Cabada, and Maria Rendón. Is it a group show or three solo shows packed into one room? It’s both. United by certain themes and stylistic tendencies and yet distinctive in their approach, these three artists have agreed to share a space to see what develops.

All three artists share an interest in the ability of art to tell stories, but these are not the narrative paintings of yore. These paintings and sculptures do not report on great battles or illustrate biblical parables. Instead, the works contain personal stories – even secret stories – drawn from the lives of the artists. Love, loss, family, friendship, discovery, regret, and the occasional joke inspire them. A certain Surrealist inflection – often of a specifically Western or Latin American heritage - can also be seen and felt. Indeed, these artists operate a lot on intuition. If their works expose such personal information, they also conceal certain crucial details. It is a familiar posture in the age of Facebook and Twitter, where the boundaries between and public and private are so easily blurred. Viewers might get an idea of the story and its emotional message without quite knowing the specifics. In that way, the universals of human experience are explored in terms both personal and highly subjective.

WESLEY ANDEREGG received a degree from Arizona State University. He has been an artist in residence at the Anderson Ranch Arts Center in Snowmass Village, Colorado and at the Archie Bray Foundation in Helena, Montana. He has had 22 solo exhibitions in 26 years and has lectured and been published widely. In particular, he has been featured in three of Lark Books’ successful ceramics publications: 500 Ceramic Sculptures, 500 Clay Figures, and Handbuilt Ceramics.

RAFAEL PEREA DE LA CABADA received a degree from the National School of Painting, Sculpture and Printmaking in Mexico City and received his MFA from the University of California, Santa Barbara. He currently teaches Advanced Painting and Drawing in the Fine Arts Department at Santa Barbara City College. In 2011, he completed a tile mural with designer Richard Irvine on the West Beach promenade, and last year, he had a mid career retrospective at the Westmont Ridley-Tree Museum of Art.

MARIA RENDÓN received a BFA from the Universidad Anahuac in Mexico City and another BFA from Art Center College of Design. She is currently pursuing her MFA at the University of California, Santa Barbara. After establishing a major career in illustration, she has reoriented herself towards fine art with works exhibited at Santa Barbara Museum of Art, the Westmont Ridley-Tree Museum of Art, the Contemporary Arts Forum, the Atkinson Gallery at SBCC, Lotusland, and the Channing Peake Gallery.