Birds on a Wire poetry 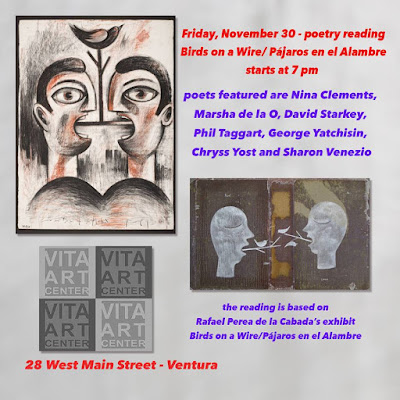 The reading starts at 7p.m.

Birds on a Wire/ Pájaros en el Alambre is a new body of work by renowned visual artist Rafael Perea de la Cabada. This exhibition explores our connection with birds in a symbolic, environmental, and philosophical manner through a variety of mediums, including paintings, drawing, works on paper, printmaking, photography, and ceramic objects.
Posted by RPC at 9:54 AM No comments: 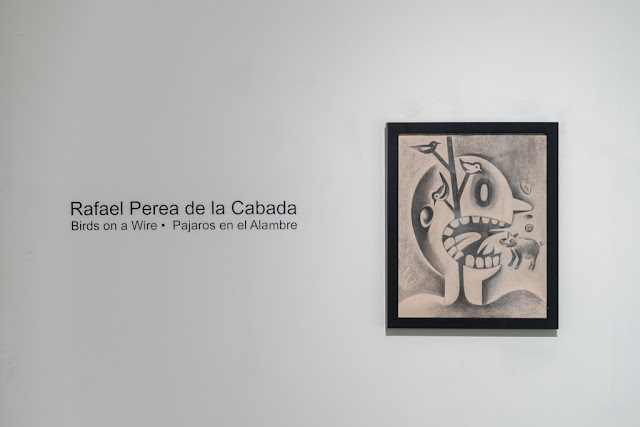 Pájaros en el Alambre /Birds on a Wire is a new body of work by renowned visual artist Rafael Perea de la Cabada. This exhibition explores our connection with birds in a symbolic, environmental, and philosophical manner through a variety of mediums, including paintings, drawing, works on paper, printmaking, photography, and ceramic objects.

In these works, birds often serve as a humble but powerful metaphor for Latinos in America: caught in permanent migration towards opportunities and socio-political liberation, wings extended with flying potential, clipped often by the laws of the land or nature.
Some interpretive text is provided by renowned animal ethologist and bestselling author Dr.Jonathan Balcombe. “Scientists are constantly discovering new aspects of birds’ lives, including how they think, and what emotions they are feeling. In this exhibit, I share some of these discoveries to compliment Rafael Perea de la Cabada’s thought-provoking artworks,” says Dr. Balcombe.
An inspired poetry reading by former Santa Barbara Poet Laureate, David Starkey, and Philip Taggart
current Ventura County Poet Laureate, and friends will take place on November 30th at 7pm.

ABOUT THE ARTIST
Rafael Perea de la Cabada has lived in Santa Barbara since 1987 and in Ventura since 2015.
Perea received a degree from the National School of Painting, Sculpture and Printmaking inMexico City and went on to earn his M.F.A. from the University of California,Santa Barbara.  He has exhibited at many galleries and museums in Southern California including the Santa Barbara Museum of Art, the Contemporary Arts Forum, The Armory Center for the Arts in Pasadena and the Hunsaker-Schlesinger Gallery in Santa Monica.  He has also shown in New York, Washington, Tennessee, Texas, Mexico, Puerto Rico, Cuba, Croatia, Spain and Germany.
His work is included in numerous public and private collections in Mexico, Switzerland, France, Germany and the United States.
Rafael teaches Drawing in the Fine Arts Department at Santa Barbara City College and has served as a Master Artist for mentorship programs, master classes, and mural projects for both the Santa Barbara Museum of Art and The Arts Fund.
He recently completed a Public Art Commission with designer Richard Irvine on the West Beach Pedestrian Improvement Project for the City of Santa Barbara.
rafaelperea.com
cabadagray.com

Hours:
Monday through Friday 10am - 4 pm, Weekends by appointment
Posted by RPC at 6:40 AM No comments: 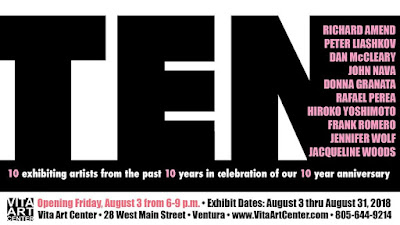 In celebration of our 10 year anniversary we have invited 10 artists that have exhibited at Vita Art Center over the past 10 years. 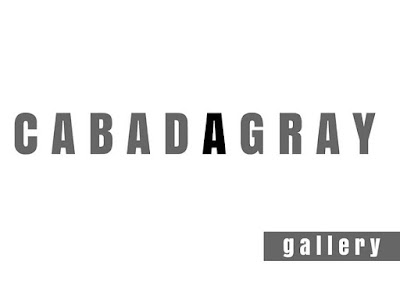 The Artists of USCB 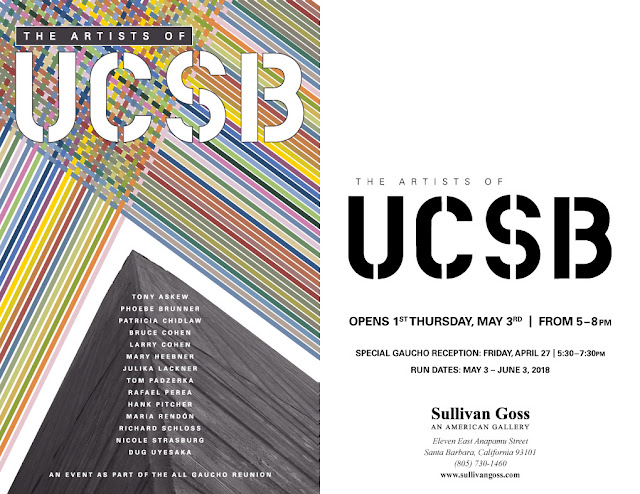 Join us for the All Gaucho Reunion first ever reception in celebration of some of UCSB's most distinguished alumni artists. This event is kindly hosted by the Sullivan Goss Gallery in downtown Santa Barbara and includes a drinks reception and remarks from participating artists.

This event supports the Alumni Association Scholarship Fund. Five percent of all sales for the duration of the month-long show will be donated to the Fund, which supports academically outstanding lower-income students. Additional donations to the Alumni Scholarship Fund can be made online.

Please note that tickets are limited and event registration is required. 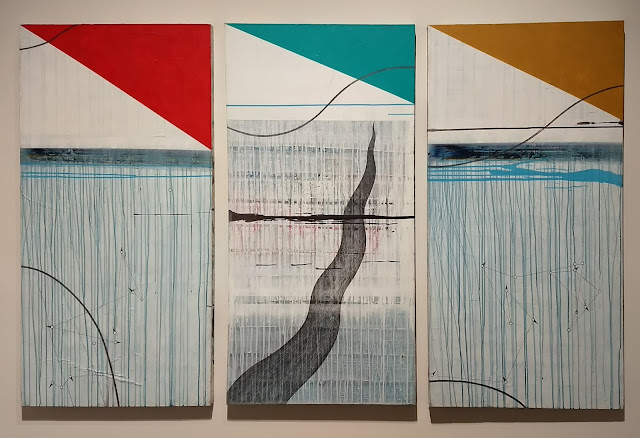 SYSTEM DISRUPTION that seeks answers in visual art to one of the most important questions of our era – namely, what is the ideal balance between a system
(or pattern) and its disruption?

What is the ideal balance between a system and its disruption? How can the eye “know” things about the world before there is any scientific or mathematical explanation? No matter where or when, some system is being “disrupted” by another, resulting in change. Beginning February 1st, Sullivan Goss Gallery (11 E. Anapamu St.) seeks to answer these questions through visual art in a new exhibition, System Disruption.

This show uses some of the best artists’ works to observe how normal individuals might be able to balance the need for order and predictability with the need for invention and transformation.

Starting with the earliest artist in the exhibition, Lockwood de Forest who dated back from 1850-1932, the show observes how this particular artist constituted an art system by working with similar proportions to land, sea and sky. Painting only outdoors, De Forest was pressured to finish his works quickly before the sun set. Since he painted on thick paper, De Forest could not return to his works to turpentine out mistakes. In his case, the “system” was both a format and a process because the repetition allowed him the maximum freedom to develop and refine his subtle coloration and evocative brushwork as he painted all over the world.

Similarly for Nicole Strasburg, her system was also a format and a process which began with her desire to learn how to paint in gouache. Collecting internet-borne weather camera shots, Strasburg made prints of the basic landscape forms and then painted on these prints, recording the changing landscape captured by her camera. Painting in one size and on one medium, Strasburg was able to capture a spectacular amount of variety. Strasburg’s system displays more than enough disruption by capturing climatic and seasonal changes on one spectrum.

This similar format within a constrained process is also practiced by artist Bob Nugent, who draws and paints images of his observations along the Amazon river. Nugent slices large sheets of wood veneer into 3 x 3 inch pieces which are then combined onto panels to create one foot by one foot nature studies. Nugent is not only interested in the connection between how the memory’s filter interacts with the photographic and written experiences, but also the subtle message about the clear cutting of Amazon rain forests and the ever changing shape of the river itself.

On the other hand, the process of scraping layers of wet spray paint was of interest to R. Nelson Parrish, a man who uses art a means of reconciling an ongoing investigation into the subtle contrasts between the natural and man-made conditions and states. Painting numerous wet on wet layers of archival aerosol on cold-pressed Arches paper, Parrish realized the paint would dry too quickly for him to add more detail and began to scrape stripes. Soon enough, Parrish created a symbolic piece of art—the American flag.

Going hand-in-hand with the current political discussions is the “#Metoo Series” by Nancy Gifford. After her famous piece “Lament” became widely exhibited, the artist became a collector of old books. Gifford took the interior texts of these novels, mounted them to birch panels, painted an open ruffle skirt and added legs in different postures.  Gifford’s art displays her idea of the system being designed to disrupt society’s dialogue about certain “types” of girls within communities.

To some artists, such as Rafael Perea de la Cabada, the system is simple, undefined process For Perea de la Canada, art has no defined format and is constantly evolving through a series of counter moves. In his piece, Interferencia (Interference), Perea de la Cabada illustrates a system through its original signal recorded in many layers, drips and drawings, suggesting that his work exists in the presence of disruptions.

As for other artists, systems are best understood as a creative and intuitive practice. Nathan Hayden’s idea of a system is shown in his tiny pictographic ink drawings which are strategically placed around an axial symmetry with notes that he has taken during the moment to help maintain his creative flow. Although creative disruptions are integrated throughout the process, the transformations from one form to the next keep his system evolving.

At the high point of the Modernist movement in the mid-century, humanity and gumption collided with geometric abstraction when two west and east coast artists worked to bring distraction to the system. Jules Engel (1915-2003) of Los Angeles and Sidney Gordin (1918-1996) of New York worked with and against “the grid,” pushing formal boundaries to see what was possible.

Collisions also occur in Ann Diener’s drawing and collage of the system of time, immigration, development and decay. Illustrating how places can be molded by disruptive forces, Deiner added digital photography and swirled compositions of familiar images in a process of “over-drawing” to describe her idea of the system.

Artist Ethan Turpin created a “Video Organism” piece, which reflected his idea of a system that feeds and evolves on its disruptions. In this piece, organic geometries grow from his two-camera setup and uses its output as an input to evolve new designs. Turpin’s idea was to allow the public to interact, and further “disrupt” the system, but the system would only adopt those disruptions and evolve.

This exhibition was originally scheduled to open on the 1st Thursday in January. Ironically, the Thomas Fire disrupted the Gallery’s usual system.

The exhibition opening reception is Thursday, February 1 from 5-8 p.m, at the Sullivan Goss Gallery and remains on view through February 25.