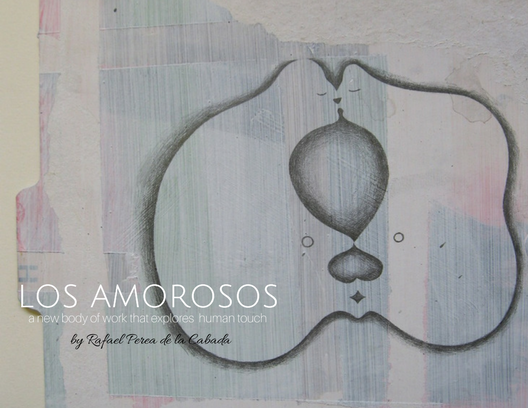 Ventura, CA – In the spirit of The Getty’s Pacific Standard Time initiative, renowned visual artist Rafael Perea de la Cabada will present a new body of work that explores the subject of human touch: physical, spiritual, social, and psychological. “Los Amorosos” (The Lovers), features painting, mixed media on paper, prints, and ceramic objects and opens with a public reception on Friday, September 1st from 6 to 9 pm at The Museum of Ventura County’s Tool Room Gallery at the BellArts Factory at 432 N. Ventura Ave., Ventura, CA.

“We live to relate and we relate to live,” says Cabada, “In this time of persistent unrest, we are reminded through the artist’s work, of the power of connection and relationship; to ourselves and to each other.”

When commenting on Perea’s art, Charles Donavan of the Santa Barbara Independent said, “The new Westmont Ridley-Tree Museum of Art …could not ask for a better introduction to its potential than the Rafael Perea de la Cabada show Alien Heartland. Cabada’s bold, imaginative work in multiple media has never looked better, or more complete, than it does in this handsome room…Cabada is a central figure in our art community here in Santa Barbara, and his is a story and an oeuvre that we should all both know and celebrate”.

Award-winning artist Rafael Perea de la Cabada was born in Mexico City and has lived and worked in Santa Barbara and Ventura, CA since 1987. Perea received a degree from the National School of Painting, Sculpture and Printmaking in Mexico City and went on to earn his M.F.A. from the University of California, Santa Barbara.  He has exhibited at many galleries and museums in Southern California including the Santa Barbara Museum of Art, the Contemporary Arts Forum, The Armory Center for the Arts in Pasadena, and the Hunsaker-Schlesinger Gallery in Santa Monica.  He has also shown in New York, Washington, Tennessee, Texas, Mexico, Puerto Rico, Cuba, Croatia, Spain, and Germany. His work is included in numerous public and private collections in Mexico, Switzerland, France, Germany, and the United States.

Rafael teaches Painting and Drawing in the Fine Arts Department at Santa Barbara City College and has served as a Master Artist for mentorship programs, master classes, and mural projects for both the Santa Barbara Museum of Art and The Arts Fund.  He recently had a solo exhibition, “Mexico Para Armar,” at UNAM in Mexico City, completed an important Public Art Commission with designer Richard Irvine on the West Beach Pedestrian Improvement Project for the City of Santa Barbara, and served as the Founding Art Director for The Animal Museum Los Angeles. To learn more visit: www.rafaelperea.com

The Getty’s Pacific Standard Time is a far-reaching and ambitious exploration of Latin American and Latino art in dialogue with Los Angeles. Led by the Getty, Pacific Standard Time: LA/LA is the latest collaborative effort from arts institutions across Southern California. As a Mexican national who has spent equal amounts of time living in the United States, Perea brings a unique perspective to this conversation of art, identity, and what it means to be human in this current exhibition, “Los Amorosos” (The Lovers).
FB event page
Posted by RPC at 1:40 PM No comments: